To share your memory on the wall of William Chant, sign in using one of the following options:

Provide comfort for the family of William Chant with a meaningful gesture of sympathy.

Passed in peace at the FJ Davey Home on May 2nd in his 89th year with his loving wife Mary by his side. A devoted loving husband and life-partner of Mary for more than 60 years. B... Read More
CHANT, William Gerald: October 29, 1931 to May 2, 2020

Passed in peace at the FJ Davey Home on May 2nd in his 89th year with his loving wife Mary by his side. A devoted loving husband and life-partner of Mary for more than 60 years. Beloved and cherished father of Ruth (Raul Diaz) and Sheilagh Fillion (Jay).
Gerald was born in Hyde, Cheshire England to his late parents Horace William and May Chant (nee Markland). He is predeceased by his sisters Audrey Blud (late Nicholas), and Ruth and his brother Peter (Alicia). Fondly remembered by his nephews and nieces and their extended families, Nicholas Blud (Josie), Paul Blud (Lisa), Linda Chant and Becky Aubrey (Mark). Lovingly remembered by his Irish family, his brother-in-law Philip Smyth (late Cora), sister-in-law Patricia Smyth and his nieces Lorna, Corinna and Lisa.
Gerald joined the merchant navy in England and travelled the world as a young man. In the early 1950’s, he travelled to Canada, landing in Sault Ste. Marie. Within a few years, he left the Sault briefly only to return with his mother, sisters and brother. In August 1961, he married his wife Mary, and together they settled in their new home on Kitchener Road where they lovingly raised their two daughters.
Gerald spent 35 years employed as an Electrician at Algoma Steel but after work hours, he enjoyed playing soccer in the Sault Soccer League, bowling at Northcrest Lanes where he played on Ernie’s TV and Radio team, and he could always be coaxed to join his friends for a night of cards. Many wonderful memories were made with his young family on holidays, including the epic one month car journey across the US, a road trip to Cape Breton, many trips to Ireland and the journey to England to visit his birthplace with his wife and daughters. In his later years, he enjoyed numerous trips to Sault Michigan with his son-in-law Jay to play Blackjack. Many laughs and good times were shared on these outings. Gerald is remembered fondly by great friends and neighbours on Kitchener Road and vicinity, as well as the broader community.
In his final years, Alzheimer’s and dementia slowly began to change Gerald’s daily life. In September 2016, he moved into the FJ Davey Home where he received wonderful care by the exceptional teams of NPs, RPNs, PSWs, Aides, Activity Coordinators, and Kitchen staff on Driftwood 1st Floor. The family is so appreciative for the loving care and compassion provided to Gerald every day, but particularly in his final days.
Cremation has taken place and a Celebration of Life and Prayer Service will be held at a later date. Memorial contributions to the FJ Davey Home Foundation or Alzheimer’s Society would be greatly appreciated by the family.
Read Less

Receive notifications about information and event scheduling for William

There are no events scheduled. You can still show your support by sending flowers directly to the family, or planting a memorial tree in memory of William Gerald Chant.
Plant a Tree

We encourage you to share your most beloved memories of William here, so that the family and other loved ones can always see it. You can upload cherished photographs, or share your favorite stories, and can even comment on those shared by others.

Posted May 10, 2020 at 07:35am
To Mrs. Chant and family.
Please accept my heartfelt condolences on Gerald's passing.
Although it has been many years, I was a student of yours at Corpus Christie School between 1966-68. The old adage that we all have at least one teacher that we never forgot is very true and you, Mrs. Chant are that lady.
I still remember Gerald on his way home from work, arriving at the classroom window, flashing a brilliant smile and collecting the car keys to make his way home.
May your fond memories of a life well lived comfort you at this most difficult time.
You are in our thoughts and prayers.
May he rest in peace.
Jimmy Spina
Peterborough, Ontario
Comment Share
Share via:
R

Thank you so much James for that wonderful sentiment - you brought back so many memories with that image of my dad stopping in at Corpus Christi to pick up the car. Many days, Sheilagh and I would go with dad to pick up mom at school...... Thank you so much. Your words are so heartwarming. Ruth Chant Miami Florida
AL

Posted May 08, 2020 at 09:24pm
Oh my sweet sweet Gerald! You were so loved and will be missed even more. My favorite part of my shift was hearing you coming up the hall for breakfast, singing / whistling and a big smile for me to start my day off on a high note. Mary, Ruth and Sheilagh - I am so sorry for your loss. He loved all his girls immensely and I always enjoyed his stories of past memories with you all, his face would light up and he couldnt be more proud. Much love xo
Comment Share
Share via:
R

Thank you so much Ashley - Dad certainly loved to whistle and sing.... He always loved music. I am glad he made your workday so memorable and pleasant. He did love "all the pretty girls" and was always appreciative of your care and kindness. Thank you for all you did for our dad and for all you continue to do for your residents. Warm regards, Ruth Chant (the Miami daughter) 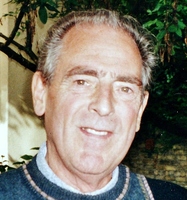