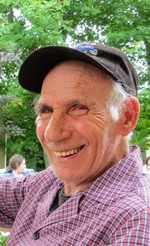 Floyd passed suddenly at his home on Monday September 28, 2020 in his 87th year. Predeceased by his wife Ruth. He was the loving father to 6 children from two marriages: David, Doug, Larry and Linda Hill, Nadine and the late Brian Jull. He was a wonderful Grandpa to his grandchildren: Brian, Allan, Kevin, Amanda, Laura, Stephen, Greg, Shannon, Glen, Christine, Robbie, Daniel, Brandon, Kevin, Nicholas, Andrew and Amanda. He is survived by his beloved sister Marie Katanik. He was a truck driver by trade and loved his job. Among many of his accomplishments he retired with just under 31 years loyalty to Wilson Truck Lines and earned a certificate for clocking 11 million kilometres on the road. He also won safe driver of the year by the Sault and Algoma District in 2000. He loved his sports whether watching it on TV or coaching a junior hockey team. His personality was larger than life. If you ever met him, you would never forget him. He was a force to be reckoned with and could always make you smile. For all those left behind he will be missed more than words can say. Memorial donations may be made to the Sault Ste. Marie Humane Society.