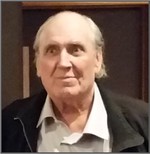 
Peacefully at home on September 22, 2019 at the age of 70.
Terry was predeceased by his parents Wilfred and Agnes Jolicoeur.
Dear brother of Bonnie, (Vern Jennings), late Gary, late Carol, late Billy, Richard, Brenda, Leonard (Karen) and his little sister the late Judy (Mark Vanslyke).
"Nunc" will be sadly missed by Angel and Cindy-Lou as well as his many loving nieces, nephews, cousins and friends. The family would like to give special mention to Jim Slack thanks for being there. There will be no funeral service, but a Celebration of Life will be held at the Elks Hall at a later date.