To share your memory on the wall of Rick \'SRichard\' LaCrosse, sign in using one of the following options:

Peacefully at ARCH with family by his side. Treasured husband of Ingrid. Father of Julie LaCrosse (Sheldon Watkins), Richard Smith (Laurie Bloomfield), Ted Smith (Ami-lee), Tracey Taylor and the late Michael LaCrosse. Grandpa to Evan LaCrosse, Sarah McCulloch, Daniel McCulloch, Krystine Smith, Ted Smith, Katie Bloomfield-Smith and Hank Smith. Son of the late Albert and Jean LaCrosse. Brother of Candy LaCrosse, Trudy Wannamker (Robert), Gina Shubrook (Willie) and the late Earl LaCrosse. Brother-in-law to Shelley Petingola (Steve) of London Ont., Randy Dewling (Nancy) and the Phillips family. He was a nephew, cousin and special uncle Rick to many. He will be missed by his Riding Brothers and Sisters. He was blessed to have so many friends including his Cooper Lake Family. As a heart recipient in 1994, Rick was thankful for his second chance, special thank you to all the doctors and nurses in Sault Ste. Marie and London that helped for all those years. The family would also like to thank ARCH for their wonderful care of Rick. In keeping with Rick’s wishes, cremation has taken place. Memorial donations may be made (payable by cheque or online) to ARCH.
Read Less

There are no events scheduled. You can still show your support by sending flowers directly to the family, or planting a memorial tree in memory of Rick 'SRichard' LaCrosse.
Plant a Tree

We encourage you to share your most beloved memories of Rick 'SRichard' LaCrosse here, so that the family and other loved ones can always see it. You can upload cherished photographs, or share your favorite stories, and can even comment on those shared by others. 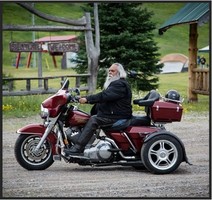