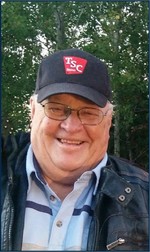 We regret to announce Bob's passing after a short illness at the Thessalon Hospital on Sunday March 1, 2020, 4 days short of his 80th birthday, with his best girls at his side. Bob leaves behind his wife of 52 years Dianne (nee Campbell), children, Marla (Kevin Barber) and Rob as well as the pride of his life, grandchildren, Ellen, Mack and Roy Barber. Bob’s surviving siblings, Berna Parker and Mark (Penny) Adamson, in-laws Dawn and David Kucher, Denise Campbell and Boris Hirsherick, and countless friends share in the sadness of his loss.

Bob has been cremated. A Celebration of Life will take place at a later date, details will be announced. The family would like to thank Dr. Haapala, nurse Amy and her team especially, as well as the caring nurses and doctors at the Thessalon Hospital, Sault Area Hospital and Matthews Memorial Hospital.