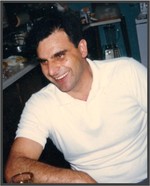 On Tuesday, April Twenty-Second, 2020, Louis Panico, loving husband, father, and grandfather, passed away at home at the age of Seventy-Four. Louis was born in the Italian town of Poggiomarino (Naples) in the fall of 1945. At age thirteen, he made the journey to Canada with his family and settled in Sault Ste. Marie. In 1966, he married the love of his life Lorraine Frances Stadnisky and kept a loving (and very loud) marriage for Fifty-Three years. Louis retired from ASC after Thirty-Six years as a dedicated employee. He was a jack of all trades until he eventually found his place as a roll grinder. When Louis was not at work, he enjoyed a variety of hobbies. Many fond memories were made out at his camp, spending time outdoors, fishing, hunting, snowmobiling, and above all just being with those he loved. Loyal to the sport but not to a team, Louis could often be found in his recliner, screaming at the television during Hockey Night in Canada. He spent many a summer day tending to his garden or tinkering away in his garage. Anyone who knew Louis knew that above all he enjoyed good food, good wine, good friends, and good times. Father of the late Lori-Anne (1967), James (Heather) and Elizabeth (Andrew Rathwell). He will be affectionately remembered by his adoring grandchildren Lewis, Makayla, Schyler, Shania, and his great-grandson Jaxon. Son of the late Pasquale and Rosa. Beloved son-in-law of Thomas (aka Romik) and Frances Stadnisky. In true Italian fashion, Louis was the youngest of nine. Brother of the late Tina D’Ettorre (the late Alfred), the late Dominic (Anna), Anna Adorante (Gabriele). Louis had five sisters pass away in Italy at a young age. Brother-in-law of the late Marie (Wickstrom) Perks, Rose Cameron (the late Ken Davies and the late Don Cameron), the late Joseph Stadnisky (the late Mary), Patricia Dufresne (the late Eugene), Jean Levesque (Paul), Thomas Stadnisky (Olga). Cherished uncle of Anthony, Mark (Liliana), Rosemary (the late Al Elliott), Alfred (Vivian), Linda (Carmen), Pat (Marietta), Carmella, Robert (Mollie), Joanna (Mario), Patricia (Victor), Eric (Jodi), Tina (Frank), Ken (Mary), Sharon (Oliver), Thomas (Frances), Debbie (Art), Frank (Lou-Anne), the late Steven (Lori), Heather (Terry), Mary Lynn, Robert (Anne), Patti-Jean, Donna, Donald, Richard (Anna-Marie), Anne-Marie (Ken), Pauline, Thomas Vern (Isla), Darren (the late Michelle) and Dean. As well as a treasured uncle to many great and great-great nieces and nephews. Tremendous heartfelt thanks go to Dr. Spadafora, Louise, Dr. Buehner, Dr. Baath and all the excellent nurses/caregivers who provided comfort, care, and kindness during an exceedingly difficult time. Thank you to Tracy’s Dream for all you did for Louis as well as for the continuing support to all the families fighting cancer. A very special thank you to long time friend Father Veselko Kvesic. His endless care and comfort will be remembered and never forgotten by us. A celebration of Louis’ life will be held at a later date. Memorial contributions may be made to Tracy’s Dream and/or to The Sault Area Hospital Cancer Care Fund.