To share your memory on the wall of Lorraine Bax, sign in using one of the following options:

Lorraine passed away peacefully at home with her family on October 28, 2020 at the age of 79. She will be deeply missed by her beloved husband Clarence of 58 years. Cherished mother of Leeann (Dennis) Thompson, Lisa (Ron Mastropietro) Warner and Ron (Kelly) Bax.
Lorraine was the proud Oma of Christina Thompson, Mick (Elisa) Warner, Jeff (Shaina) Warner, late Justin Bax and Ryan Bax. Great Oma to Isla Warner.
Daughter of the late Alex and the late Elia Amaroso (nee Coleffi).
Sister of Sheila Mount and Alan Amaroso. Sister-in-law to Debbie Amaroso.
Daughter-in-law of the late Jacob Cornelius and Adriana (Verhoog) Bax.
Sister-in-law of the late Joanne and the late (Bill) Vanderploeg, the late Mary and the late (Bert) Hummelen, Margaret and the late (Albert) Herfst, the late Jim (Ruth) Bax, Gertie and the late (Adrian) Wielhouwer, Jean (Pete) VanHelden, the late Art (Barb) Bax, Bernie (Tina) Bax, Hank (Margriet) Bax, Herb (Janette) Bax, and Frits (Jan) Bax.
Lorraine will be missed by many dear nieces, nephews, and friends.

Lorraine showed tremendous love and pride in her children, grandchildren and the brightest light of her life, her beautiful great granddaughter. She wants each of them to remember her with stories of the joy and zest she lived with each day. Those spoken memories will keep her close to their hearts where she will continue to share in their future.
Being with Lorraine was always an adventure. Her incredible love of life was her everlasting gift to those she leaves behind. She will always be remembered for her excitement for a party whether she was graciously hosting or as a guest. However, she was involved, you could guarantee the spotlight would find her laughing, dancing, joking and always expressing her joy. Even without a party that love of life shone through to all of us you were blessed to walk along this worldly path with her.

A private family service will be held. A Celebration of Life will be held at a later date.
Memorial donations to the SAH, ARCH or a charity of your choice would be appreciated. Thank you to her team of angels who helped her through the last month. They include many family, close friends as well as Dr. Apostle and her home care nurse Kim. Arrangements entrusted to O’Sullivan Funeral Home & Cremation Centre (215 St. James Street, 705 759-8456)
Read Less

Receive notifications about information and event scheduling for Lorraine

There are no events scheduled. You can still show your support by sending flowers directly to the family, or planting a memorial tree in memory of Lorraine Mary Bax (Amaroso).
Plant a Tree

We encourage you to share your most beloved memories of Lorraine here, so that the family and other loved ones can always see it. You can upload cherished photographs, or share your favorite stories, and can even comment on those shared by others.

We are saddened to hear of the loss of Lorraine and send our sincere sympathies to your family. May the memories you shared offer comfort in the days ahead.

Thank you for choosing to honour Lorraine’s memory by asking friends and family to make gifts to Sault Area Hospital Foundation.

With our deepest condolences, 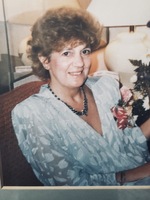