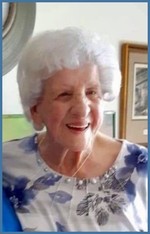 Peacefully, in her 99th year on July 7, 2019 in Holland Michigan.
Predeceased by her husbands Ferls Morosini in 1971 and Clare Cralle in 2003.
Loving mother of Richard Morosini (Marie) of Naples, FL., Marilyn Barre
(late Greg) of Holland Michigan as wells as Clare’s children; Gary Cralle (Lis), Gail Goniwiecha (Jim) and Darlene Wiegand. Mamere/Grandma will be dearly missed by all her grandchildren and great grandchildren. She is survived by her brother Clifford Thibert and was a special aunt to many nieces and nephews.
At Irene’s request there will be no visitation or service. Memorial donations may be made to ARCH.