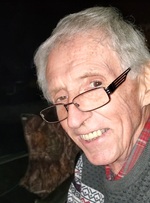 Ward, Ted-
It is with much sadness that my sister Carol Newsome and I, Margaret Ward Newsome, announce the death of our younger brother, Ted EJ. Ward (Jill Lang-Ward deceased) in Sault Ste. Marie, ON. Ted leaves behind his two sisters, Carolyn Ward Newsome (late Harry) and Margaret (nee Ward) Newsome, (Ron) to mourn his loss. Son of the late E.H. (Harry) Ward and the late Beatrice (Beatty) Quayle Ward.

Ted had lots of friends from Ottawa to Sault Ste. Marie who will miss him too. Ted was born in Verdun, P.Q. on Aug. 4, 1944 and lived, and went to school there until his adult years when he moved to Ottawa to be close to family.

His best friend Thea Cripps was a Godsend to us and especially to Ted. Thea looked after him through thick and thin even before he was so sick. The family wishes to thank Thea for all her kindnesses to Ted and to Carol & Marg when we visited Ted in October. Thea is part of our family now!

Thea would like to send a huge thank you to Amanda who also spent countless hours assisting her with Ted, Andrea, his nurse and Lori, his PSW.

Donations can be made out to Thea Cripps. Arrangements entrusted to O’Sullivan Funeral Home and Cremation Centre, 215 St. James St, 705-759-8456.