To share your memory on the wall of Dave Sartor, sign in using one of the following options:

Provide comfort for the family of Dave Sartor with a meaningful gesture of sympathy.

It is with deep sorrow the family of Dave regret his sudden passing at his home in Lake Cowichan B.C. Dave was born in Sault Ste. Marie to the late Rose and Norman Sartor, the 2nd of... Read More
SARTOR, David J. (February 1, 1954-September 10, 2019)

It is with deep sorrow the family of Dave regret his sudden passing at his home in Lake Cowichan B.C. Dave was born in Sault Ste. Marie to the late Rose and Norman Sartor, the 2nd of 4 children. He is survived by his wife Evelyn Sartor, his brother Mark (Debbie), his adored nieces Erin and Devan (Joey) and his fur baby Sophie. Predeceased by his younger brother Norman Sartor Jr. Dave served his country for the better part of 30 years. First with the reserves in the 49th Field Artillery Regiment and later in the Royal Canadian Navy as a Hull Technician. Dave sailed the west coast on HMCS Provider, Kootenay and Algonquin. As Devan remembers her uncle Dave, he was one hell of a wordsmith, the way he could string words together. He was one of the most intelligent and hilarious persons that she ever met. And anyone who knew Dave would definitely agree. Dave’s love of shooting earned him a spot on the 1984 Mar Pac Rifle Team, and he competed with the best of the best at the Connaught ranges in Ottawa. He was an A2 on HMCS Algonquin’s Boarding Party Team during HMCS Algonquins deployment to the Arabian Gulf with OP Apollo. He thoroughly enjoyed whilst he was a member of this team and shared his extensive knowledge of firearms with team members. He was also an excellent tradesman, journeyman welder and earned his red seal while working at Algoma Steel. As a Hull Technician and with his experience as a journeyman welder, he was a natural to be a welding instructor for the Canadian Forces Fleet School Esquimalt. He shared his knowledge of the trades to anyone who would listen. Dave had a special place in his heart for Vancouver Island, especially Port Renfew and Bamfield. That’s why his ashes are now floating in the Pacific Ocean. He spent his weekends camping, shooting and exploring logging roads in his trusty Toyota pickup. Dave touched many people during his career with his compassion, his wit and he always had a kind word for his students and subordinates. He is THE sailor in many sailor’s tall tales. A Celebration of Life for Dave will be held at the Royal Canadian Legion Branch 25 (96 Great Northern Rd) on Saturday November 9, 2019 from 2:00pm-5:00pm. In lieu of flowers, memorial donations may be made to ARCH.
Read Less

Provide comfort for the family by sending flowers

We encourage you to share your most beloved memories of Dave here, so that the family and other loved ones can always see it. You can upload cherished photographs, or share your favorite stories, and can even comment on those shared by others. 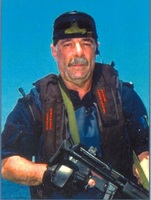