To share your memory on the wall of Clement Giovanatti, sign in using one of the following options:

On Wednesday, May 27th, 2020 Clement passed "through the valley of the shadow of death...to dwell in the house of The Lord forever".
Born on November 30th, 1941, Clement was the only and precious son of the late... Read More
GIOVANATTI, Clement

On Wednesday, May 27th, 2020 Clement passed "through the valley of the shadow of death...to dwell in the house of The Lord forever".
Born on November 30th, 1941, Clement was the only and precious son of the late Hugo and Carmela Giovanatti (Pavone). He is survived by his beloved sister and lifelong advocate, Irma Giovanatti-Bre (late Roland); by his beloved children...Gratia, Irma and David; by his dear grandchildren...Max, Chiara and Annika; and by his loved sons-in-law...Paolo Toscano and Paolo Di Renzo. Clem is also survived by many cousins from the Giovanatti and Pavone sides of the family.
As a young boy Clement attended King Edward Public school. It soon became evident that he was gifted both athletically and intellectually. His high school years at Sault Collegiate were followed by a hockey scholarship at the University of Windsor. There he obtained a Bachelor of Arts degree in French and German. He furthered his studies at the Ontario Teachers College and, a few years later, obtained a Master of Arts degree in Modern Languages from the University of Toronto. Clement was an exceptional high school teacher who spent several years challenging the minds of his students in the disciplines of languages and history. He also coached high school hockey. At the top of his game he was stricken with a permanent illness. Its' sequelae resulted in a cascade of life-altering losses. Surprisingly, his Faith increased as his social acceptance decreased. Although Clement never attended a Catholic elementary or high school, he was raised in Marion Devotion by a loving mother. From the same early age he had a keen awareness that his gifts should be used for the glory of God and service to others. As a long-time member of the local Amnesty International group, Clem spent countless hours resolutely writing on behalf of countless persons around the world whose human rights were being denied. For many years he participated in peaceful anti-abortion protests. He gave generously to the poor. Clement never considered himself accomplished in any special way but, to those who knew and loved him and, yes, were even challenged by him, his legacy leaves enduring lessons in sacrifice, humility, acceptance and unshakeable Faith.
Words are inadequate to express the family's profound gratitude to all those who provided comfort and care to Clement over the years. Thank you, Phil Bourgeois, Clément’s long-time friend and confidant. Thank you, Doctors John Clarke, and Sante Fratesi. In addition to your continuous medical expertise, you always treated Clem with such dignity. Thank you also to the litany of other Doctors who cared for Clement throughout his many hospitalizations. Sincere gratitude to Clement's "angels" on Twin Lakes, Maple View Extendicare. You made him feel "at home". Your care was exemplary. Last but not least, sincere gratitude to all the priests who offered spiritual direction and the sacraments to Clement, both throughout his life and also during his many hospitalizations.
Due to the pandemic restrictions, a private service will take place at the O'Sullivan Funeral Home officiated by Father Pat Woods. Interment in Holy Sepulcher Cemetery will follow. A mass in celebration of Clement's life will be scheduled at a later date.
Read Less

To send flowers to the family or plant a tree in memory of Clement Ugo Giovanatti, please visit our Heartfelt Sympathies Store.

Receive notifications about information and event scheduling for Clement

We encourage you to share your most beloved memories of Clement here, so that the family and other loved ones can always see it. You can upload cherished photographs, or share your favorite stories, and can even comment on those shared by others.

My sincerest condolences on the passing of Clement. Clement was a wonderful teacher and human being. As a teacher, he inspired me and motivated me to pursue higher education. As a human being he instilled a sense of justice, integrity and humility. I remember when he assumed responsibility for coaching the boy's hockey team at Collegiate and how he provided opportunities for some of the less skilled players who demonstrated commitment and heart. Clement understood the importance of participation and personal development over winning. He saw the big picture. My thoughts and prayers are with the family.

Posted May 31, 2020 at 02:06pm
Believe it or not, when I saw Mr. Giovanatti's obituary, I had to go and find one of my SCI Argus yearbooks to ensure this was the same teacher I had for our German language classes in high school. My condolences on the loss of this great man! I remember him as an excellent teacher - very intellectual and knew how to help you achieve more than you thought you could. SCI has had many great teachers over the years and he was definitely among the best that were there. The number of true gentlemen and scholars on Earth is less now but has increased by one in the heavens above.

Posted May 31, 2020 at 06:45am
Irma and Family,
So very sorry to read about the loss of your Father. My thoughts and prayers are with you and your Family at this most difficult time.
Lorrie Shelleby
Comment Share
Share via: 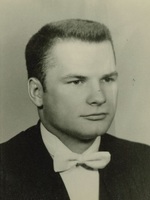