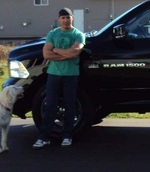 It is with deep sorrow we announce the passing of Carey Daniel David Bock (Bear) on Wednesday, May 13, 2020 in his 45th year from ALS. Beloved son of Frank Bock (Amanda Capper) and Krys Fraser (Dave). Much loved by many aunts and uncles, but especially Aunt Maria Bock and cousins Angela MacDonald-Petkovic (Lou), Michael MacDonald, as well as Uncle Chester Kopyt and cousin Steven. Bear had a wide variety of accomplishments but excelled at bowling and darts. He won 1991 Canadian National Youth darts, which enabled him to represent Canada at World Championships in England. In 1996 he won NCAA team championship in bowling representing Saginaw State University. In 2003 he won TSN pins championship in Canada. Special thanks to Maureen and Shane Mousseau for coaching Bear in darts; and Dan Dorian, coach for Saginaw State University. His family would like to express thanks for all the support we have received since Bear's diagnosis; Ontario Provincial Police; Alex and Marcy; and Reggie's West; as well as all our family and friends. Much appreciation to the Sault Area Hospital for their kindness through this difficult time. A celebration of Bear's life will be held at a later date. All donations to Sault Area Hospital and ALS Canada would be gratefully appreciated.